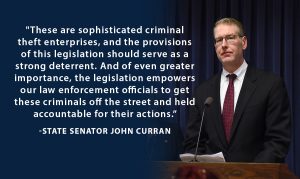 In an effort to combat the spike in organized retail theft in Illinois, State Senator John Curran (R-Downers Grove) is sponsoring bipartisan legislation that would put strong accountability measures in place while providing law enforcement with new and necessary tools to bring brazen criminals to justice. The legislation was unveiled at a Statehouse press conference on Tuesday.

“These are sophisticated criminal theft enterprises, and the provisions of Senate Amendment #1 to House Bill 1091 should serve as a strong deterrent. And of even greater importance, the legislation empowers our law enforcement officials to get these criminals off the street and held accountable for their actions,” said Sen. Curran. “The multi-jurisdictional approach to this legislation strips away any perceived shield these criminals think they may enjoy by acting in one particular location, as these organized operations ultimately result in stolen goods being transported and resold throughout the state.”

The legislation is the result of a collaborative effort between the Illinois Retail Merchants Association, the Attorney General’s Office, and legislators and staff from both chambers of the Senate. It relies on a multi-jurisdictional approach that is currently missing in the state’s criminal code, and provides law enforcement with the ability to attack not only the frontline perpetrators of these retail thefts, but every actor who participates throughout the entire chain of profiting from the proliferation of black-market goods.

“Often times, the individuals who commit the actual theft of goods are lower-level participants in the chain,” added Sen. Curran. “Through this new robust approach, law enforcement can coordinate with local, state and federal authorities to bring all participants to justice, from the planners and perpetrators of the crime, to those who transport and sell the goods either online or in a different location.”

Rob Karr, President and CEO of the Illinois Retail Merchants Association joined lawmakers at the press conference and praised the comprehensive approach in addressing the retail theft epidemic in Illinois.

“Inaction and half measures will not suffice, lest we continue to surrender to criminals exploiting the current loopholes in our laws,” said Karr. “Working in partnership with the Illinois Attorney General’s office, we have helped craft a comprehensive proposal that will bring about real change by investing in law enforcement, holding criminals responsible and making it tougher to resell stolen goods.”

House Bill 1091 awaits consideration by the Senate, and upon passage would have to return to the House for concurrence of the amendment.